French start-up Spacetrain is developing technology for supersonic automated hovertrains which the company hopes will cut travel time, costs And emissions after its launch in 2025. Varsha Saraogi speaks to the company’s strategy and development director Thomas Bernin about how the technology works.

All image courtesy of 42 Technology

pacetrain - launched by Emeuric Gleizes in 2017 - is developing a high-speed shuttle inspired by the Aerotrain - a hovertrain concept birthed by Jean Bertin in 1970. The Aerotrain was later abandoned for the TGV - the high-speed train currently running in France. Once rolled out, the Spacetrain vehicle could connect Paris to Orleans in 13 minutes and operate at an average speed of 540km/h, reaching a maximum of 720 km/h. This would be faster than the TGV, which only peaks at 340km/h.

While the Spacetrain shuttle will run on a principle somewhat similar to the Japanese Maglev train, the latter uses electromagnets to levitate the vehicle, while Spacetrain which uses air cushions.

The first prototype is currently being tested, but the company aims to have a fully working prototype ready by 2020 and a real train running by 2025. Strategy and development director Thomas Bernin talks about how the futuristic technology is more sustainable, reduces costs as well as journey time for passengers, and is set to become the “Airbus of the Toulouse Region.”

Varsha Saraogi (VS): How does the technology work?

Thomas Bernin (TB):  Spacetrain is an autonomous shuttle, which circulates in sustentation by means of air cushions on a reversed «T» track and is powered by hydrogen fuel cells. Its average circulation speed will equal around 540km/h.

To ensure the levitation of the module, the technology uses air compression – a high-performance cushion technology that guarantees a controlled consumption [of] 30kW combined.

The shuttle is propelled by linear induction motors, consisting of a primary fixed to the rolling stock - called the inductor - and a secondary made of ferro-metallic plates fixed to the monorail - the armature.

Hydrogen fuel cells use the electrochemical combustion of the gaseous dihydrogen with gaseous oxygen by simultaneously producing electricity, water and heat. Thanks to our hydrogen storage capacity, the shuttle can circulate 600km in autonomy. But it is very likely that this will increase in the years to come.

VS: What was your main goal when you came up with the technology of the Spacetrain?

A demonstration of the Adaptable Carriage

TB: At a time when the passenger transportation market in France is changing, we aim at offering an affordable solution capable of considerably reducing travel times between territories for a positive impact on the economic development of these regions.

With reference to the railway sector in France, rail transportation needed a refreshed and competitive model. The costs have become too high for railway company owners and operators, who are now degrading their service to users with issues such as the increase in the number of perturbations, decrease in frequency, connection closings, etc.

The Spacetrain Project gives an answer to this constraint by adapting to the existing rail network while proposing moderated costs of development.

VS: The train moves at the speed of 540km/h. Are there any risks?

TB: In circulation, it impossible for the train to derail because of the special shape of the railway.

Moreover, it will run outside, with no tube around and not in an [enclosed] environment, so it is very easy to leave the shuttle in case of emergencies. In those cases, we have emergency braking provided by carbon brakes which enclose the vertical part of the rail.

VS: What challenges do you face while testing the technology?

TB: We are testing each component - which comprise of air cushions, linear motor technology, energy management system on board - separately.

After testing those, we will fit them on our first prototype scale 1:2 - the one that was introduced on the Paris Bourget Air Show in June - and we will test that prototype before the end of the year, in a « T » track built in our laboratory close to Orléans.

Our components are already being manufactured and sold in various places. For example, we sold our linear motors to Siemens, hydrogen fuel cells to Air Liquid. Spacetrain is an integration solution. But the main challenge is the system of energy management to optimise the energetic consumption of all these components.

VS: How does the technology tackle the issue of reducing emissions?

TB: Spacetrain is a zero-emission solution. The hydrogen fuel cells leverage the electrochemical combustion of the gaseous dihydrogen with gaseous oxygen, by simultaneously producing electricity, water and heat. Unlike hydrocarbons, the combustion of hydrogen is not accompanied by the release of carbon dioxide, which is why it gives the battery the label of a clean generator.

According to our research, if every trip between Orléans and Paris - which is about 130 km - was replaced by Spacetrain shuttle trips, it could save 32,500t of CO2 emissions per year.

VS: Do you plan to roll out the technology in other countries apart from France in the near future?

TB: We have many promising contacts with other countries, in particular, Asia, Africa and even the US.

Many countries want to develop their territory with a high-speed transport solution but costs of the existing solutions like for example Hyperloop projects, TGV or Maglev are too high. Spacetrain’s main advantage is its very low costs. In terms of construction, one kilometre of Spacetrain technology would be around €8m-€10m.

That is why many are particularly interested in Spacetrain.

VS: The French Government announced that they would be injecting €13.4bn into the rail sector, so where do you see the industry going? 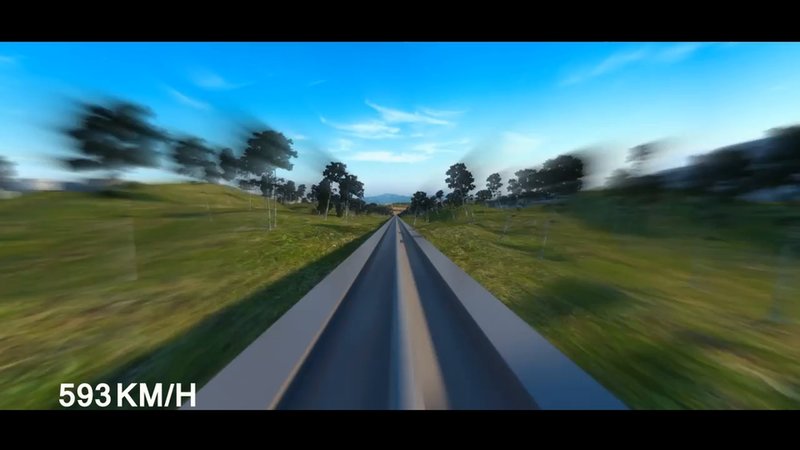 TB: Most of the time, that financial aid benefits mainly large market players. But if the French Government - through various grant programmes - could encourage the Spacetrain project, we could develop our activity in France, and become the equivalent of Airbus of the Toulouse Region.