Predominantly known for its medieval cathedral, Coventry will be making history once again as it is set to become home to the UK’s first ‘very light’ rail line. Frankie Youd profiles the scheme, highlighting the benefits that it will bring to the area.

cting as one of the latest research and development projects utilising automotive expertise, Coventry Very Light Rail (CVLR) is on track to deliver an innovative and affordable light rail network to the area.

The project, which is part of a £1.3bn ($1.7bn) travel plan, is part of 50 other projects that have been agreed upon by the West Midlands Combined Authority (WMCA). The scheme has been selected due to it promoting the decarbonisation of transport, which is a key area of focus for the WMCA.

As well as the environmental benefits that CVLR will bring, the project will also target investment into areas of poor connectivity. The scheme aims to provide an alternative means of transport and reduce the number of cars on the road – easing congestion and improving air quality.

Funding for the project has been secured from the WMCA, Coventry and Warwickshire Local Enterprise Partnership, and Coventry City Council. Alongside the CVLR development, investment in the existing metro system will continue, with funding to be set aside to develop the business case for its extension.

To achieve the desired success of the project, Coventry City Council is collaborating with Warwick Manufacturing Group at the University of Warwick, Dudley Council, Transport for West Midlands, and the Black Country Innovative Manufacturing Organisation. By collaborating with these external organisations, it is hoped that the development and research provided will allow the project to showcase its full potential.

At present, the first route has been planned and developed in Coventry to provide an alternative mass transport system for the city, connecting key employment locations and the city centre.

In order to develop this system in the city centre, CVLR requires a new innovative type of track, which has been designed specifically for use within this project. This new track design is not laid as deep as conventional railway lines – which provides a benefit when it comes to reducing the need to relocate existing utilities infrastructure.

Paired with this, CVLR will be battery-powered, which removes the need for any overhead power cables, which can be a costly setback for railway projects.

CVLR is a critical transport project for the future as it offers rail connectivity at lower cost and with a faster build time than conventional tram systems.

Speaking on the project Andy Street, mayor of the West Midlands and chair of the WMCA, said: “CVLR is a critical transport project for the future as it offers rail connectivity at lower cost and with a faster build time than conventional tram systems, as well as giving our citizens yet another clean and green car alternative.

“That is why we are so committed to funding and delivering the UK’s first very light rail system here in the West Midlands. With the system being developed in Dudley ahead of its use in Coventry, very light rail is also fantastic news for our regional economy and is a clear demonstration of how the West Midlands is helping to lead the way on sustainable transport.”

Alongside these impressive new foundations, CVLR will also be designed to be fully autonomous, operating at a high demand level to provide a ‘turn-up and go’ style service for passengers.

With work currently underway, the project has been divided into four key areas. Firstly is the design, construction, and testing of a vehicle prototype. The second is design, development, and testing of an innovative low-cost modular track. The third is the development of a design and business case for the first route in Coventry. The fourth is the design, planning, and delivery of an operations and maintenance strategy. 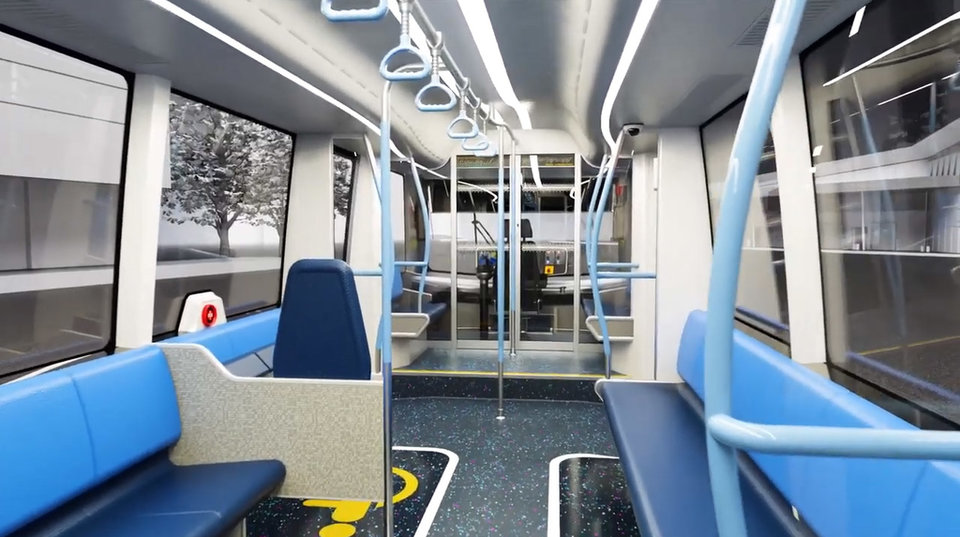 The HydroFLEX team talks about the train’s development and testing.

One of the most noticeable elements of the design is its power source: battery power. The choice of energy source was key to the project being selected, as Coventry is currently aiming to reduce its environmental impact and provide environmentally friendly solutions for the city.

Opting for battery power over conventional fossil fuels offers the benefit of reducing exhaust emissions, which leads to improved air quality. Alongside this, it is hoped that the attractiveness and reliability of the new service will encourage commuters and tourists out of their cars and onto rail – easing congestion to popular areas, further increasing the clean air levels.

But it’s not just the power source that makes the CVLR stand out from the crowd – accessibility has been a key design priority as well. The transport system has been designed with low floors, allowing passengers to embark and disembark from the pavement with ease.

The aim of the CVLR is to provide the city with a frequent, reliable, environmentally friendly transport solution, which will cost a fraction of the cost of a traditional tram that can be found across the UK.

Testing is currently underway on a newly developed test track, located at the Very Light Rail National Innovation Centre (VLRNIC) in Dudley, which has been solely created for testing the integrated system.